“Every single Empire in its official discourse has said that it is not at all like the others, that its circumstances are special, that it has a mission to enlighten, civilize, bring order and democracy, and that it uses force only as a last resort. And, sadder still, there is always a chorus of willing intellectuals to say calming word about benign or altruistic empires, is if one shouldn’t trust the evidence of one’s eyes watching the destruction and the misery and death brought by the latest mission civilizartice” — Edward Said

I do not think any pundit or critic, even those committed to the causes of indigenous people, could have anticipated that the confrontation over the Dakota Access Pipeline would play such a prominent role in political discourse, especially in light of the blackout by major media. Yet, the people gathered at Standing Rock have overcome numerous obstacles to catapult their struggle to the limelight.

After numerous treaties, historical reviews, truth and reconciliation commissions, protests, policy consultations, and outbreaks of rebellion, Indigenous people in Turtle Island/ North America are still brutalized in spectacular fashion, and they are granted no recourse – even the most basic of treaty laws are ignored or “lost” not unlike how the United States, Canada, and other accomplices to NATO blatantly violate international law.

Let me put it frankly and simply, America is an Empire and not, in any quantifiable sense, a  Democracy. While most everyday “Americans” experience the unfairness, aloofness, and ridiculousness of the American capitalist and imperialist system to some extent or another, none experience it more blatantly than the nationalities America has colonized. Within American borders there are the Dene, the Lakotah, the Irqouois, and hundreds of other nations I do not have the time to name. Beyond American borders, we can include in this Afghans, Iraqis, Libyans, Filipinos, Puerto Ricans, and numerous other peoples dominated by US financial and military might by direct or indirect means.

As this empire stretches itself further across the globe, it experiences crises and strangulation, prompting the need for more intense exploitation and violence at home to facilitate and legitimize the next expansion. The US has long been set on regime change in Syria, for example, but has experienced a number of setbacks in what they thought would otherwise be a swift victory. It is in this context that we see a rushed, desperate attempt to force “development” of the American “homeland” at the expense of the actual Indigenous population

The Hypocrisy of the No-Fly Zone 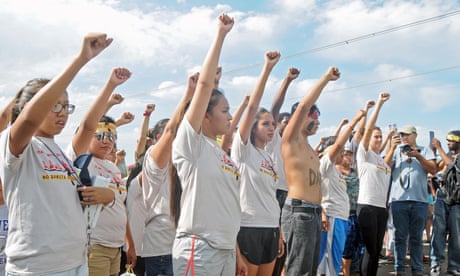 Forte describes the logic of regime change discourse, used systematically to advocate for no-fly zones and invasions across the world, best embodied by the assault on Libya (Forte, 2013) but now equally applicable to Syria, which Hillary Clinton has slated for being the next No-fly Zone, without regard for how many Syrians it will lead to their demise.

1) Moral Dualism: We see this in the vilification and dehumanization of resisters and land defenders; the persistence of the “savage” image in mass media, the depiction of land defenders as inherently backwards (as if destroying the environment is not violently backwards!). Yet somehow US imperialism is benevolent.

2) Moral Narcissism: The hypocrisies of settler-colonialism and imperialism are on full display. While the US government rains drone strikes on the colonized world and sanctions the right of armed gangs of whites to lay claims to stolen land, peaceful protesters are seen as such as threat as to incur brutal violence and imprisonment.

3) Demonization: Again, the image of the “savage” or the “indian” or more recently the “security threat” rears its ugly head when Indigenous people break into the media cycle.

We have seen military tactics and deployments used to further internal colonialism in the United States before, most notably in the military’s role in the evacuation of New Orleans during hurricane Katrina. The United States military blatantly discriminated against black evacuees, preferring whiter, wealthier victims to save, yet the despondency of black communities in New Orleans today is treated as a product of “natural disaster” (the hurricane) rather than the product of discriminatory responses to that crisis (Noel, 2013). Years from now, I wonder if the environmental destruction of the Standing Rock territory by the Dakota Access Pipeline will be recorded as the result of “natural” causes.

The pipeline resisters at standing rock have also been subject to a no-fly zone not unlike the one visited on Libya and perhaps soon on Syria. The Federal Aviation Administration (FAA) has restricted flights, banned the use of drones within a radius of about four-and-a-half miles of Cannon Ball. Only aircraft affiliated with the North Dakota Tactical Operation Center are allowed within the restricted airspace. The flight restriction is scheduled to  last until November 5. This is a blackout in anticipation for an “invasion” of the protester camp.

For Canadians: We Are Not Innocent

It would be easy for Canadians to attribute the violence at Standing Rock to just another case in the gargantuan farce called an election that the United States insists is democratic and legitimate while its order collapses at focal points along its chain of authority. But Canada, like the United States, is a Settler-Colonial society, founded on the same genocide and conquest which gave rise to the Pax Americana Empire in the first place. Our own indigenous population is brutalized, policed, imprisoned, and dispossessed in much the same manner as the peoples at Standing Rock. We should note the courage and intensity of resistance required by the people of Standing Rock and their allies when our own pipelines are prepared to be laid.