“Debt… is a cleverly managed reconquering of Africa.” – Thomas Sankara

In the 1980s, on the tail-end of growing south-south unity and economic development, the world was plunged into an international debt crisis which threatened the sustainability of the capitalist world-system. The political decisions enacted to adjust the global economy ushered in neo-liberalism and globalization as we know them today. Thus, it is generally accepted debt was of central importance to the advent of neoliberalism. However, with the crises of debts reaching a seemingly terminal stage in various sections of the Global North and South every few years, it is clear that debt also constitutes a key element in the maintenance of neoliberalism and globalization as well. We can also understand the advent of globalization-via-debt crises as a response to the limits of the post-World War Development Project, in that the Development Project’s benefits to the Global South was not sustainable under capitalism and that it facilitated the instabilities which would create the conditions for Globalization. 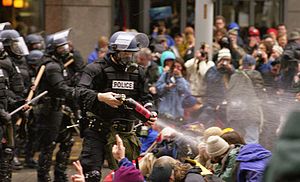 The project of neo-liberalism was ultimately a political one, relying on the extension of debt relations as a form of global governance imposed on the global south. This is captured in the phrase “debt regime” – the restructuring of debt by the IMF allowed western financiers to establish new economic and social “regimes” throughout the Global South based on the convictions of neoliberalism and free market practices.[1]

Institutions such as the International Monetary Fund (IMF) are thoroughly undemocratic, unrepresentative and unaccountable, just as they maintain an ideological affiliation to free market policy, unresponsive and thus resistant to change. The IMF functions like a corporation, with votes being allotted to countries based on “quotas” – determined by both the country’s economic size and the financial contributions of the country to IMF programs. Thus, the decision-making power of the IMF inevitably tends to favor already-developed Global North countries (McMichael, 2016), who accumulated their wealth initially through colonization.

This must be considered when discussing the merits (or lack thereof) of globalization/neoliberalism. While Globalization is generally associated with increasing interconnectivity and interdependency (and this is at least nominally true), Globalization is more accurately the consolidation of international neoliberalism. Rather than being a foundation of innovation, as its pundits often claim, neoliberal policy is about the maintenance of a fragile economic system, where imperialist powers come together under this aegis, “globalization”, to ensure their own economic security, an arrangement preempted by Karl Kautsky under the auspices of “super-imperialism”[2]. While I do not accept all of the implications of a theory of super-imperialism (and there are certainly rivalries within the imperialist bloc), there is no denying the increasing integration of different imperialisms, for example the US-EU-Japan triad or the US-Canada-UK New Victorian network.

In practice, this ruling through a debt regime has meant the direct assault on the sovereignty and self-determination of colonized peoples. We have noted the undemocratic structure of the IMF and the history of inequality which facilitates its current structure. These unequal, authoritative powers were used as an unprecedented infiltration of the internal politics and economies of the Global South, with debt crises as the catalyst. Countries like Mexico, dependent on loans from banks based in the Global North to facilitate the development project, were ready to default on their loans, prompting a quick solution from the IMF before large blocs of defaulters could undermine the capitalist world-economy. The IMF instituted a program where existing loans would be extended, and new loans provided directly by the IMF to pay off these debts. However, this repayment plan was conditional; subject countries would have to agree to submit to a Structural Adjustment Program (SAP) which involved a swift privatization of numerous essential development and social programs. This greatly weakened the power of the postcolonial state to act as an anti-imperialist force and opened key markets to western domination (McMichael, 2016).

To extend these debt regimes, the United States and most other powers quickly abandoned the gold standard and adopted a fiat currency. This integrated the extension of credit into the US economy, and forced the relaxation of financial regulations[3] creating the demand for increasing ‘offshore’ investments and market control in the Global South (McMichael, 2016).

For their part, workers in the first world were submerged into the process of Globalization. During the post-World War “Development Project” period, workers in the Global North occupied a relatively privileged position in terms of security and reciprocity within capitalist production. However, the post-1980’s move away from industrial Fordism and towards a Global Division of Labor, as well as the need for new methods of financing increasingly complex debt schemes, led to a collapse of the Fordist social contract and the (admittedly inconsistent) implementation of neoliberalism in the Global North.[4]

While directly taxing American, Canadian, or European workers for international projects would have generated outrage, policymakers instead made workers in the Global North and Global South subsidize arrangements like the North American Free Trade Agreement (NAFTA) through limited supplies of jobs and depressed wages, indirectly supporting the growth of transnational imperial capital and pitting workers in the Global North against more “competitive”, low-wage workers in the Global South (Workman, 2011). One way this was done was thorough the devaluing the US dollar, which was key to the initial repression of wages and increasing the US dollar’s liquidity and allowing it to remain an almost universal equivalent (Gill and Law, 1988).

Because this two-pronged, lucrative opportunity for profit-making; the depression of wages for the domestic working class and the increasingly dispossessed Global South, there is little motivation to repair the increasing indebtedness this whole process bequeaths. In fact, what we witness is the normalization of debt crises as early as the late 90’s (Strange 1998), with similar decisions being made during crises of the late 2000’s (McMichael, 2016). With the exception of some resistance from both the left and right, what we see is an expansion of deficits and the subsidizing of privatization as capitalists demand more and more kickback for volatile schemes that threaten the security of workers and keep the colonized nations of the world in a global prison-house of finance.

The relentless drive for solvency and profitability has undermined sovereignty of the modern state and has led to increasing instability. The pursuit of more and more profit maximization by transnational, imperialist capitalist class has even undermined the stability of capitalism itself (Workman, 2011). What we call Globalization is more accurately Americanization and neoliberal imperialism.